A group of scientists have responded to criticisms about rapid turnaround coronavirus tests, as they sought to dispel “factual errors” made by other experts.

Some 14 professors and health leaders refuted claims made in an article published in the British Medical Journal (BMJ) which stated that a mass rollout of lateral flow tests in care homes, schools, communities and by “untrained people at home” could cause “serious harm”.

This claim was rejected by scientists including Dr Susan Hopkins, chief medical adviser for NHS Test and Trace, and Professor Calum Semple, from the Scientific Advisory Group for Emergencies (Sage), as they stated that the BMJ article contained “factual errors and makes several unsubstantiated allegations and assertions”.

In a written response, they said the authors of the article, including Jon Deeks, professor of biostatistics at the University of Birmingham, have “prejudged” lateral flow tests, adding: “They appear to have made up their minds that LFDs (lateral flow device) are dangerous and of no value and therefore should never be used.”

While they acknowledged Prof Deeks role as lead researcher of the Cochrane Review of Covid-19 diagnostic tests, they said they were “surprised” that he considered himself “an expert in Covid-19 or public health activity”.

They added: “The authors are not actively involved in the breadth and depth of activities needed to evaluate LFD uses properly.”

They asserted that there was “persistent and continuing confusion” between lateral flow tests, which can give results in less than 30 minutes, and PCR tests which are assessed in a lab setting and can have a slow turnaround time.

They said: “The authors treat PCR mathematically as a perfect gold standard of infectiousness when there is now substantial evidence that it is not.”

Prof Deeks had previously said that lateral flow tests in a mass pilot scheme in Liverpool “missed 60% of the cases which would have been picked up by PCR”.

But Professor Louise Kenny at the University of Liverpool said this claim was “factually incorrect” and that the findings from the pilot scheme were misinterpreted.

Speaking on BBC Radio 4’s Today programme, she said: “Much of the confusion in the debate around the accuracy of lateral flow has arisen because their performances are being directly compared with PCR.

“But critically, PCR tests also detect people with really low viral loads who are unlikely to be infectious, so that comparison is really unhelpful and underestimates the effectiveness of lateral flow.”

She said interim analysis of the Liverpool scheme was “very cautious” and that lateral flow tests detect at least two thirds of people most likely to be infectious.

She pointed to a recent study by Oxford University in which researchers said rapid tests could be effective in quickly detecting the most infectious cases in a relatively cheap way.

Lateral flow tests are regularly used by NHS staff and plans were put in place for mass testing in schools before they were forced to shut to most pupils in the latest national lockdown.

Prof Deeks, a vocal critic of lateral flow tests, called on the Government to halt the rollout of rapid testing and argued that people should not be told that these tests are “better than they are”. 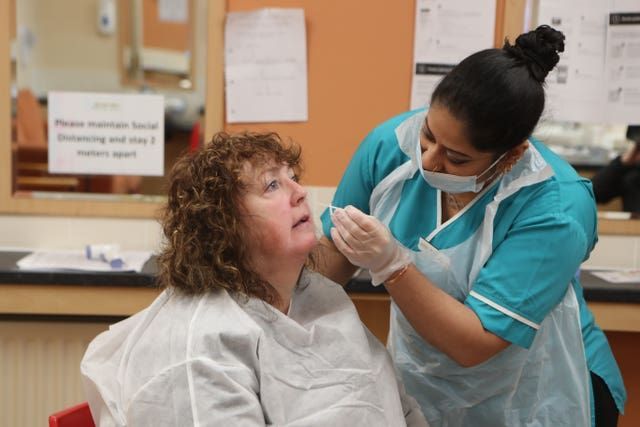